Read our 10-Year summary to learn more about the EITC Pooled Fund’s history, structure, impact, lessons learned, and the work that lies ahead. 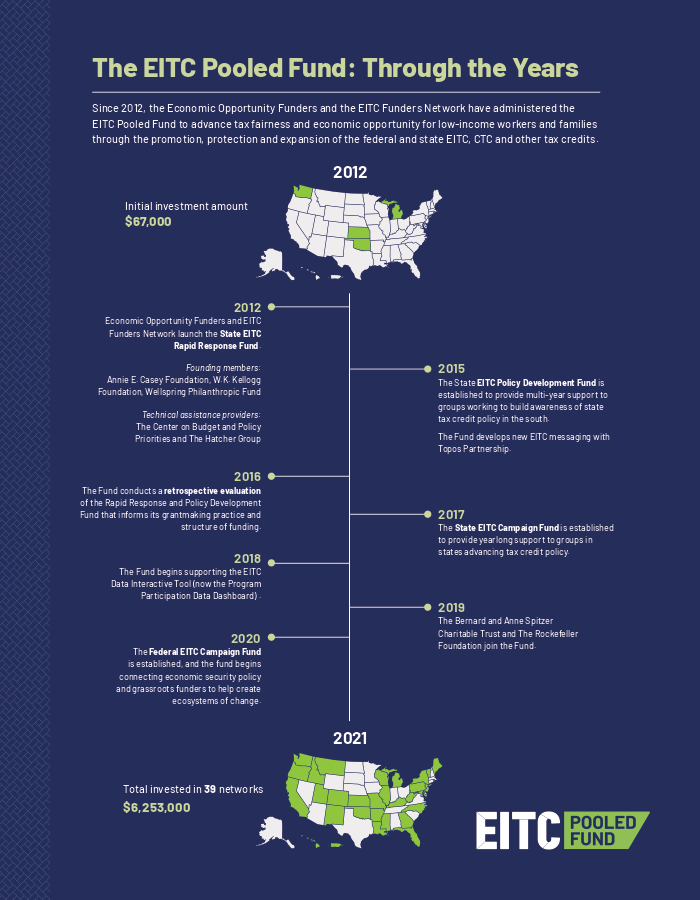 View our 10-year timeline of activities to advance tax fairness and economic opportunity for low-income workers and families through the promotion, protection and expansion of the federal and state EITC, CTC, and other tax credits.

Working together to increase public support for the federal and state EITC, CTC and other tax credits.

Launched in 2012, the EITC Pooled Fund has awarded more than $7 million to 42 networks, helping to advance economic opportunity for low-income workers and their families across the country through the creation and expansion of tax credits. Economic Opportunity Funders and the EITC Funders Network administer and oversee the State EITC Rapid Response, Campaign and Policy Development Fund and the Federal EITC Campaign Fund to advance tax fairness and economic opportunity for low-income workers and families through the promotion, protection and expansion of the federal and state EITC, CTC and other tax credits. The four funds – together known as the EITC Pooled Fund –  are guided by an advisory group, supported by five national funders and administered by EOF and the EITC Funders Network in partnership with the Center on Budget and Policy Priorities and The Hatcher Group.

Participating foundations in the EITC Pooled Fund include:

The Earned Income Tax Credit (EITC) was established in 1975 as the nation’s most significant policy reform to reduce poverty and incentivize work for low income Americans.

The EITC puts money back into the pockets of working families struggling to make ends meet.  It helps provide immediate relief— so that they are able to buy groceries, pay utility bills, and buy school supplies—and helps them begin to break the cycle of poverty for future generations by getting additional education and training, better transportation, and saving for their children’s education.

The EITC lifts 5.6 million Americans, including 3 million children out of poverty each year, making it one of the nation’s largest and most successful anti-poverty programs.

In addition to the federal EITC, 30 states and the District of Columbia, Guam, and Puerto Rico, and some municipalities now have state or local EITCs.

See these links for more information:

This Fund was established in 2012 and focuses on quick infusions of support to help an existing effort overcome a campaign or communications challenge or opportunity. Awards are made on a rolling basis and range from $15,000-$30,000.

This Fund was established in 2017 and focuses on supporting a year-long effort where a window of opportunity to promote or defend a state EITC seems urgent. Awards range from $30,000-$125,000.

This Fund was established in 2015 and provides multi-year support to state-based policy groups laying the groundwork to develop or improve state EITCs. Awards are made in the early Fall and range from $75,000-$125,00 a year for two years.

This Fund was established in 2020 and focuses on supporting work on the federal EITC and CTC, including work on tax-based benefits in the context of federal stimulus and relief packages. Awards are made on a rolling basis and range from $25,000-$160,000.

The EITC Pooled Fund has made four awards in 2022 to state organizations working to help build public support for state EITCs, CTCs and other tax credits. NEW Michigan League…

Learn more about the work of the EITC Pooled Fund over the last decade through our 10-Year video, summary, and timeline.

The Federal EITC Campaign Fund has made a new award to Humanity Forward to support efforts to educate stakeholders and build public support for the Child Tax Credit.

This year-end report provides an overview of the EITC Pooled Fund awards and lessons learned in 2021.

Additional Work of The Fund:

The Fund has supported several messaging research efforts to support awardees and the field.

In 2012, The Fund contracted with a national polling firm (Hart Research) to support new research on EITC messaging through focus groups and national polling. Findings from this research are available upon request.

In 2015, building on the polling and focus group findings, The Fund contracted a messaging firm (Topos Partnership) to explore the set of messages that might shift how people think about the EITC. This research, using deep “talk-back” message testing in several locations across the country, explored how people think about the EITC as a mechanism to reduce poverty and their reactions to messages regarding fraud and abuse of funds and other key message points. See findings from this research here.

In 2022 The Fund contracted with SKDK to help support the creation of a centralized communications hub focused on the expanded Child Tax Credit that will work to promote the benefits of the policy, create and distribute a daily rapid response digest, and create new resources and additional communications capacity for advocates.

The Fund also provides support to two national field partners – Center on Budget and Policy Priorities and The Hatcher Group. Each year, these national partners work collaboratively to prepare a scan of the state EITC policy field and identify opportunities and challenges that The Fund could work to address. National field partners also provide direct technical assistance to awardees and share learnings with the field.

With support by the EITC Pooled Fund, the Center on Budget and Policy Priorities has launched a new Program Participation Data Dashboard, providing links and interactive tables of state-by-state data on participants in a variety of programs for families and individuals living with low income including EITC, SNAP, Medicaid and CHIP and SSI.

This tool will be incredibly helpful to funders and grantees seeking to better understand the reach and impact of these programs in local communities across the US.

With support from the Rockefeller Foundation, The Fund began exploring opportunities to support the connection of economic policy and engagement funders. This resulted in a series of activities including:

Additional conversations in Florida and other select states are antcipated in 2022.

A 2020 GUIDE TO Effective EITC Advocacy (Dec 2020): A comprehensive list of strategies highlighted in all 21 TCWF case studies.