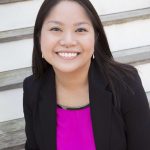 Under her leadership, New Virginia Majority has expanded the electorate in Virginia to be more reflective of Virginia’s rich diversity by registering nearly 300,000 new voters and knocking on over 3.1 million doors to get people of color and young people to the polls. As a result, Black and brown voters have turned out in record numbers, contributing to a new Virginia that gives voice to the most underrepresented communities.

Working with key partners, she anchors several progressive initiatives throughout the state that has had significant victories for Virginia’s more vulnerable populations. This includes restoring civil rights to over 200,000 formerly incarcerated people, expanding Medicaid for nearly 400,000 Virginians, allowing all immigrants, regardless of their status, to drive safely on our streets, and showing the country how to lead on expanding voting rights.

Prior to joining New Virginia Majority, Tram organized and advocated on behalf of survivors of some of the country’s most devastating disasters – both natural and man-made. As a project coordinator for the World Trade Center Rescue and Recovery Program at Mount Sinai Medical Center, she helped secure federal funding for a health treatment program to address the unmet physical and mental health needs of rescue and recovery workers at Ground Zero. As the director of Boat People SOS’ emergency preparedness and response efforts, Tram organized tens of thousands of Vietnamese immigrants throughout the Gulf Coast whose lives were devastated by
Hurricane Katrina. She managed a multi-state program in LA, MS, AL, and TX that provided cultural and language-appropriate services and empowered immigrant families to self-advocate for the sustainable redevelopment of their communities and businesses.

Tram currently serves on the Board of Directors for the Eugene and Agnes E. Meyer Foundation and on the national advisory council for the Institute for Women’s Policy Institute. She is a certificate faculty member at Georgetown University’s McCourt School of Public Policy. Tram is an alumna of Barnard College; a 2011 Lead the Way Fellow of the NYU Robert F. Wagner Graduate School of Public Service; and a 2012 Executive Fellow at the Center for Progressive Leadership.