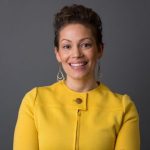 Samantha Tweedy is a mission-driven nonprofit leader, racial and economic justice advocate, and public education innovator.  She currently serves as the first Chief Partnerships & Impact Officer of Robin Hood, a role she was instrumental in creating at New York City’s largest anti-poverty organization.  In this role, Samantha sits on the Leadership Team and partners with a 40-person Board of business leaders, philanthropists, and thought leaders. She also sets the strategy for, and manages, the team marshaling capital, attention, and resources to the programs and organizations that are proven to be most effective in the fight against poverty.

Prior to joining Robin Hood, Samantha served as the Chief Advancement Officer and Senior Director for External Impact for Uncommon Schools.  As the organization’s first Chief Advancement Officer, she defined the vision and successfully led the implementation of a comprehensive external engagement and communications strategy, and served as a member of the Executive Team, playing a key role in decisions about the strategic direction of Uncommon’s 52 schools in three states with 2,400 staff members and a $300M budget.  Beyond defining and leading Uncommon’s brand and external voice, and helping to secure new school sites across six cities, she and her team raised $50M in public and private grants.

Her hands-on educational experience includes founding and co-directing the Brooklyn-based Excellence Girls, an elementary school that won the National Blue Ribbon award in honor of closing racial and economic achievement gaps and its “fierce female” curriculum, and as the Head of School for Excellence Boys, a college preparatory all-boys elementary and middle school.  In this role Samantha managed a staff of 100, ranging from principals and social workers to custodial, operations, and administrative staff, and devoted herself to building relationships with families that fostered students’ academic success and long-term goals.

Following her graduation from Yale Law School, where she was the Director of the Legal Advocacy Clinic’s Education Group and a member of the Executive Board of the Black Law Students Association, Samantha worked as a litigation attorney at Simpson Thacher & Bartlett LLP.  At Simpson, she represented a nonprofit school finance reform coalition in impact litigation on behalf of New York City’s under-resourced communities, and corporate entities on issues including negligence, tax indemnification, and regulatory compliance.