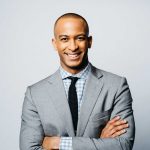 A progressive scholar, organizer and media personality, Dorian Warren has worked to advance racial, economic and social justice for more than two decades. Like the organizations he leads, Warren is driven by the innate conviction that only social movements – led by the people most affected by racial, economic, gender and social injustice – can change their communities and public policies for the better.

Warren is co-president of Community Change – an organization founded in 1968 by civil rights, labor and community leaders to honor the memory of Robert F. Kennedy’s fight to end poverty in America. He is also the co-founder and co-chair of the Economic Security Project, an innovative social impact organization that has already shifted the national conversation around cash, economic power and economic security. And he is also the co-host of the Deep Dive podcast on The Takeaway with Melissa Harris-Perry.

Warren taught for over a decade at the University of Chicago and Columbia University, where he was co-director of the Columbia University Program on Labor Law and Policy. He’s the co-author of The Hidden Rules of Race, co-editor of Race and American Political Development, and numerous academic articles. He also worked at MSNBC, where he was a Contributor, fill-in host for “Melissa Harris-Perry” and “Now with Alex Wagner” as well as the Host and co-Executive Producer of “Nerding Out” on MSNBC’s digital platform (now Peacock). He was previously a Fellow at the Roosevelt Institute and serves on the boards of Working Partnerships USA, the Leadership Conference on Civil and Human Rights, the National Employment Law Project, The Model Alliance and The Nation magazine.