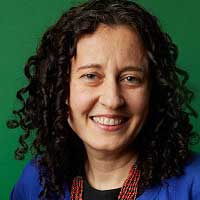 Amy is part of the Civic Engagement and Government team at the Ford Foundation. Her work has focused on the intersection of economic and political inequality, addressing questions of to whom government is accountable and for whom government works. Through her grant making, she has sought to address the outsize influence of money in politics, unfair and regressive tax policies, and budget priorities that do not reflect the public good. Previously, Amy was part of Ford’s Economic Opportunity and Assets program, where her work focused on predatory lending, financial reform, and the racial wealth gap.

Before joining Ford in 2010, Amy was a senior consultant to the Aspen Institute’s Economic Opportunities Program. Prior to that, she launched New York City’s earned income tax credit campaign and was a professional staff member at the US Senate Agriculture Committee, where she worked on food stamp, child nutrition, and health care legislation. She also ran a community-based organization that provided emergency food, benefits advocacy, and other services to residents in Brooklyn, New York.