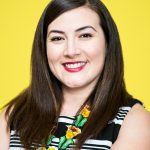 Alejandra Gomez was born in Pomona, California to immigrant parents.  Alejandra became aware of the US’ broken immigration system at a young age after Prop 187 was passed.  Prop 187 was an anti-immigration law that targeted undocumented immigrants living in California in the mid-1990s. Alejandra’s father at the time was undocumented and Prop 187, forced Alejandra’s family to move to Arizona in hopes of escaping the dangers of Prop 187 and other anti-immigrant sentiment.

Alejandra began her career in community organizing in 2007, during the beginning of Sheriff Joe  Arpaio’s criminal suppression sweeps that were racially charged and targeted immigrant communities.  Seeing the fear and harassment her community was experiencing and the remainder of her own childhood, Alejandra began working with Maricopa Citizens for Safety and Accountability to organize against Sheriff Arpaio and his unfair practices.

Since her start in organizing, Alejandra has focused her work on immigration rights through large-scale civic engagement efforts to bring out the Latino vote and direct action. Alejandra lives in Phoenix, AZ and holds a B.A. in Political Science from Arizona State University. Alejandra was the Field Manager for the Adios Arpaio campaign that registered Latinos to vote during her time with the New Organizing Institute, worked for Organizing for America in Arizona and has dedicated her work not only to leading large scale voter registration efforts that surpassing 90,000 Latinos voters registered but also worked as a Deputy Organizing Director at United We Dream during the immigration reform push in 2013 and 2014. Rooted in the her family’s immigration struggle, Alejandra lead the organizing efforts in the fight for DAPA and expanded DACA at United We Dream National Network as the Deputy Organizing Director.

Alejandra has dedicated her life to a commitment to social justice and community empowerment through grassroots mobilization. Currently, Alejandra serves as Co-Executive Director for the Living United for Change in Arizona (LUCHA).