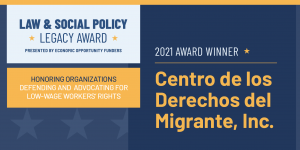 CDM was selected based on its strong record of achieving justice for thousands of migrant workers who work in U.S. industries with histories of exploitation. Its advocacy, worker organizing, and legal work have advanced migrant workers’ rights both systemically and individually, reforming the H-2 visa system and earning workers millions in settlements for unpaid wages.

CDM was one of eight strong nominations for the $10,000 award, which was established to increase awareness within the philanthropic community of organizations working to advance law and social policy for low-wage workers’ rights.